They say he’s got the whole world in his hands but lately it seems like he’s juggling a few too many priorities, if you ask me, which I know you’re not. I mean, really, you’re not even paying attention, you’re texting everyone but me on your brand new next generation iPhone and snickering and forwarding me pics you think I like, like this orb that could be a vagina giving birth to a crying bleeding orgasmic pop art spectacle laid out over a watch kind of like saying time’s getting away from us, our lives are getting away from us, this whole fucking world is getting away from us and whose fucking fault is it, I want to ask. But there really isn’t any point. Is there? Because you aren’t paying attention, you’re already off to another chain of texts and would have lost the thread of this thought long ago in cyberspace and never bothered to take the time to look at this drawing. Look at it damn it, when the text stops scrolling, and say, “wow, there’s another mind I could connect with here” instead of losing yourself in the solipsistic universe wrapped up at your fingertips on your thousand dollar nextgen phone. 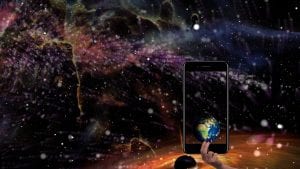 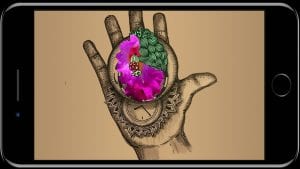 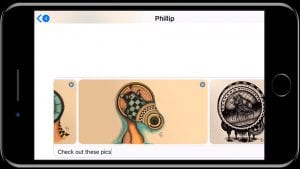 Publications include literary journals and anthologies, novels and poetry. Philip won three Indie Book Awards for his novel Seeing Jesus, and the Gold award for poetry from ArtAscent Magazine.

I’ve been a fan of Sergio Tapia’s illustrations for a couple of years. His style reminds me of Basil Wolverton’s surrealistic work, which I still recall from Mad Magazine when I was a kid. Last summer, I wanted to write poems to artwork for my blog Wind Eggs, but Sergio was the only artist to agree. I wrote the poem “Whole Worlds,” and published it with the image, but the limitations of the site reduced the options I wanted to explore.

When I saw Poetry Film Live’s call for videos, I thought it might be fun to reproduce the project as a YouTube video. I’d produced a number of video shorts with students from the Texas Corrections System that were broadcast on cable access between 1995 and 2000, and in 2006 I produced the first episode of a cable access sketch comedy show, The Austin Rodeo. I wanted to revisit the process by animating the Whole World sketch and renaming the project Digital Distraction.

I used Adobe Photoshop CC to separate his illustration into multiple layers and imported them into After Effects. Discovering that Apple disabled the ability to use my Lavalier mic with the USB 3 MacBook Pros, I recorded the audio on my iPhone and edited it with Audition. The rest of the footage came from stock video, photos and audio.

I combined Sergio’s image with stock footage to animate the layers and explore the conceits of the original prose poem. I combined his partial watch rendering with stock footage of a clock, invoked imagery of an orchid to link his imagery to Georgia O’Keefe, and colorized and animated additional elements of his sketch.

I used screen shots of my iPhone and iPad to create the smart phone interface, and texted myself to record the SMS conversation featured in multiple scenes. Half my time was spent online researching the changes between After Effects CC and After Effects CS4, which was the version I used before this project.