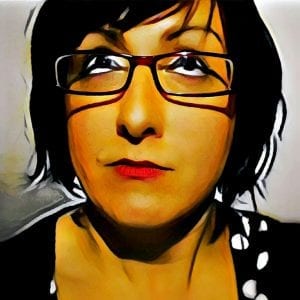 Poetry Film Live spent the afternoon with Mab Jones. We met at the Wales Millennium Centre in Cardiff Bay where Mab was performing on stage later in the day. We talked about Mab’s experience of working collaboratively to make poetry films as well as her involvement in the Coventry Disappear Here project.

PFL     You’re a successful and published poet. You’ve written for performance and page. What’s the point of Poetry Film if you already have a poem that is perfectly formed and presented as it is?
MJ       Some people are not going to engage with a block of text. It might be a beautiful poem, but how many poetry books actually sell? How many people watch a film? Film is very popular.

PFL     How is writing poetry for film different from page or stage?
MJ       The poems that I wrote for Disappear Here are more poems for the ear rather than for the page. It is a film and you are creating the audio to that, so it is more about the sound, the assonance and alliteration.

The Millionaire [which I had previously written and worked on with an animator] is a list poem. This is a very popular form that you see on the spoken word circuit. It has a lot of repetition. Even when writing for the page I tend to think about how things sound. That’s probably because I started as a performance poet and I do enjoy reading my work. There is a tendency for it to be more stage poetry than page poetry because engaging with an audience, rather than a reader, is different.

I have done script writing and I think it’s similar to that way of working. You are thinking of the listener rather than a page, and it’s about the voice in my head rather than seeing it.

Mab Jones is a “unique talent” (The Times) who has read her work all over the UK, in the US, France, Ireland, and Japan.

PFL      Before we talk about your involvement with Disappear Here, tell us about Millionaire.
MJ       The South Bank Centre were looking for poetry films for a competition, Shot Through the Heart, and I asked Lauren Orm, an animator whose work I like, if she would collaborate and create a poetry film. I had already written Millionaire, so essentially I asked her to illustrate something that was already there.

Lauren made a beautiful and simple animation. We were shortlisted in the South Bank competition and then we submitted it to the 2015 Rabbit Heart Poetry Film Festival in the USA. At Rabbit Heart we won Best Animation, Best Valentine, and Best Overall Production. It has also been shown in the Glastonbury festival.

People reacted very warmly to the poetry film. We live in a visual and digital age and when you put a video up people really engage with it, as they perhaps wouldn’t or don’t with a block of text.

PFL     How did you became one of the nine writers of the Disappear Here project
MJ         I saw a call out for poets and filmmakers from Adam Steiner who is facilitating the project and putting it all together. I pitched for it and was lucky enough to get chosen.

Essentially I gave Amelia the first poem and she made the film. For the second one, Amelia had a vision at the beginning and I worked to that vision. She showed me a film that she was inspired by and I took that as inspiration and wrote the poem. I gave her the poem and she made something completely different! It wasn’t the vision I had in mind – that’s the thing, when you work with other people you can’t be too precious about the result.

In the third one, with Alex Taylor, he supplied the film because he had made some amazing drone footage. When I watched it I found that the words were coming, it was a lovely film and the poem flowed out.

My advice would be to make sure that you talk everything through with the person you are working with, and check in with them, and make sure you are both happy with the end result.

PFL     A male voice was used for your poem O Ring Road. How did you feel about that?
MJ         Amelia asked someone to narrate that and I was not aware that was going to happen. It was a surprise and it was interesting to note my own reaction to hearing a poem that in my head was my voice.

I have recently noticed how the male voice is ascribed an authority and gravitas that a female voice isn’t given. So in a way that really worked for the poem because the listener, the people watching the film, would probably ascribe that authority to that voice. My voice would not have had that same authority. The poem is a hymn style piece and you could imagine that voice being like a priest.

PFL     What has been your biggest challenge working in collaboration with filmmakers?
MJ         Expectations. You are two different people with your own experiences, influences, ideas and visions. You both need to modify your expectations of what the end result will be.

It isn’t about anyone being in charge. It’s about give and take, conversation and dialogue, and making sure you are both happy with the result. It’s two visions combined, an ad-mixture of both.

Modify your expectations. It may not be what you imagined as you are working with someone else. It is about compromise and pooling your ideas together. Hopefully the end result will be stronger!

PFL     What advice would you give another poet who was thinking about making a poetry film?
MJ         I trusted Lauren implicitly when I worked with her on Millionaire. I had worked with her before so I knew she would do a good job.

My advice would be to make sure that you talk everything through with the person you are working with, and check in with them, and make sure you are both happy with the end result. Modify your expectations. It may not be what you imagined as you are working with someone else. It is about compromise and pooling your ideas together. Hopefully the end result will be stronger!

PFL     What can we expect from you next
MJ         Currently I’m a freelancer working in different areas in literature. I’m writing a novel and I’m almost at the end of the first draft. Hopefully, I am going to do more presenting work with a poetry programme on Radio 4.

I am also running International Dylan Thomas Day. Last year there were fifty events around the world, anyone can join in and if you put on an event and get in touch with me, I will market it.

Mab Jones is a “unique talent” (The Times) who has read her work all over the UK, in the US, France, Ireland, and Japan. She is the author of Poor Queen (Burning Eye Books, 2014) and take your experience and peel it (Indigo Dreams, 2016) which won the Geoff Stevens Memorial Poetry Prize. Mab teaches creative writing at Cardiff University, writes for the New York Times, and recently presented a poetry programme on BBC Radio 4. She also runs International Dylan Thomas Day. www.mabjones.com