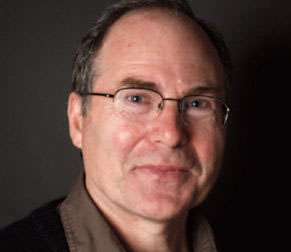 Poetry Film Live met up with Martin Rieser at The Grain House in Bristol. Martin is currently Visiting Professor in the Digital Cultures Research Centre at University of West of England. We talked to Martin about poetry and film and digital media in the ‘90s and the opportunities and challenges for poets today.

PFL You studied film at Goldsmiths in the 1980’s.

M Yes, I have done photography from childhood so it wasn’t anything new, but I got into film in about 1990. Because I was working with early digital means, I started doing interactive pieces that used poetry and film within them.

M It was quite well established, it wasn’t primitive in the sense that you could do quite a lot and you were getting into interactive CD rom by then. It was actually quite a good medium – just because stuff is now all on the net doesn’t make it that much better and the quality you could get then wasn’t very different. I think it’s about changing technologies, but ideas that were developed in that period were really innovative and they haven’t really changed that much, so the language of this stuff was established early on.

PFL Were other people working with poetry as well?

M Very few actually, so although there were people doing hypertext type work, there were very few doing it with moving image as well – I felt fairly on my own in that.

PFL When did you start writing poetry?

M I started writing poetry when I was about 13 and I kept it up ever since, but I hadn’t really been tutored much in poetry until recently. I have done a literature degree originally and I ran the literature society for Bristol University and when I was in that role I did invite a lot of poets to give talks, so I was always in that milieu. But in terms of having a poetry mentor that came later.

PFL Your early work in digital art, which included poetry, did you see those as poetry films.

M I saw them as poetry with film, but I wanted the audience to be able to read it in multiple ways and I suppose the structure I adopted allowed people to follow individual threads of the theme of the work and then correlate them across the work. It was always about multiple viewpoints and being able to move between multiple viewpoints to get to the essence of the narrative in a subtle way, and not being given one directive, and being able to judge on all sorts of evidence that came from the characters who were talking to the audience in poetic language.

M Yes I think I see it as augmentation of the poetry and giving an added richness to the poem itself.

PFL In terms of the terminology at Poetry Film Live we use ‘poetry film’ as a generic term to include ‘digital poetry’, ‘poetry films’, ‘film poems, ‘video poems’, ‘multimedia poetry’, ‘e-poetry’ and ‘screen poetry’.

M I think the problem with poetry film is that it does imply linearity and I think poetry film can be more than that, so because we have many platforms for delivery now, particularly online electronic modes, and that doesn’t prescribe the work as linear, it can be multi-linear, it can be fragmented, it can be distributed across different platforms and experienced in different ways, so I think we probably need a stronger term for poetry film now, because the word film does refer directly back to an old technology that was entirely linear and maybe we need to redefine it in some way.

Although I am making more linear work now–simply because the demands of the technology are beyond my purse strings. So I think making linear work is fine because you can build in all sorts of languages that the audience can be absorbing in less linear ways. And I think that’s something that poetry film can deliver in its linear form anyway, because the image is something very different to the word, and the image can resonate across the whole poem rather than being in relationship to all the words on the line for example, so I think by picking imagery that has oblique relationship to the text it can open up other channels of the imagination that would have been lost if it was just words on the page. I think that’s one of its strengths.

PFL How do you see poetry films being received differently when someone is in an audience, say at a poetry event, rather than in front of a personal computer.

M I think being in a participatory environment with other people always changes the reception of a piece and we unconsciously pick up what other people are feeling, saying, or emoting, just by subtle signs within an audience. So that highlights particular bits of the film for the individual that they might have missed otherwise and I think that’s why people like to consume in audiences rather than on their own. Although if you’re at home and you are just looking at something you may not give it the attention that you would give it if you’d paid to go to a cinema or a theatre. There is a difference

PFL What is the biggest challenge of moving your poems from what might have been written on the page to something on a digital platform?

M That is a difficult one because I tend to write suites of poems with a particular delivery in mind, or I did do that for a long period, so they were conceived together with the work itself. One of the last things I did used augmented reality. It had fourteen channels of poetry that were augmented with dance and music, but the way that the audience consumed the work meant that multiple interactors would create a richer environment for the poetry to be heard and this was the sound environment that built up as more people joined the viewing audience. So I wrote that with that whole concept in mind and its very difficult to separate that overall concept from how the poetry is conceived and written. I tend to do more one-offs now and I think that’s possibly a weakness, I would rather have larger thematics, but certainly the works that I have done in the past have all been conceived in a holistic way, so its hard to separate the two.

PFL Your recent work has a political base to it.

M Yes, I think you absorb a time of crises in the world and as a poet I think you have to react to it and I think that is probably why the work has taken on a political bias recently. I think artists have to speak out when they see the unspeakable. That can become monotonous if that’s all you do, for every political poem there are is six personal ones so it’s just that in a way I want that discourse to be out there because of the crisis that is going on globally.

PFL Do you work collaboratively now?

M I tend to not want to read the text myself, I think it is far better to have someone else read it, a far better strategy and I also tend to get music composed directly for the work itself so that it is another layer and I work collaboratively with people on that as well.

PFL Why use another voice?

M I think it a) gives you critical distance on the work and b) because my voice isn’t really suitable for most of the things I write poetry about and I think it can put people off or mislead them. Some poets are very good readers of their work and others aren’t and I think it’s about fifty-fifty in history! I wish some of those poets had let other people read their work instead of reading them themselves -we get a false memory created by listening to TS Eliot or Dylan Thomas reading their work- and not particularly well.

PFL What would you say to a poet who said to you ‘why poetry film’? What will it bring to my poetry?

PFL Poetry on the page?

M Poetry on the page is a fairly recent innovation as a sole means of delivery. Poetry’s origins are oral, the rhythms of poetry are those of speech. I think it’s an awful shame if the poem just lives on the page, because it can be become a little bit precious, a little bit dry for people, and we speak it in our minds anyway when we are reading it and a poem that doesn’t speak doesn’t work in my opinion. The poets we value have a fantastic grasp of the rhythmical subtleties of the language and that’s what makes them great poets, so I think you have to test a poem by reading it out – that’s the litmus test.

PFL Your next project?

M I’m working on a pamphlet or a book called Unreliable Biographies which are a series of biographies of people who we may have heard of obliquely or may not heard of at all but have had really interesting roles in the world. I find the idea of using these different voices really quite compelling.