Synopsis
Red Line Haiku, the poem, grew out of some experimentation Brian undertook with the haiku form in recent years. As a regular traveller on the Red Line Luas in Dublin he had the opportunity to observe the daily interactions of members of the public on the trams as they travelled into and out of the city. Dublin is an old city and the Red Line is a new mode of transport, and Brian was interested in the twin ideas of tradition and modernity and how they overlap in our lives all the time.

Brian tells us: “The first haiku I wrote were snapshots from the perspective of the commuter. The haiku form is ideal for this kind of observation. Traditionally in Japan there are two images juxtaposed in a haiku with also a veiled reference to the season. In my modern sequence I have opted for a more or less linear narrative over the course of a day on the tram as told by a commuter, juxtaposing images of old and new along the route.

Some of the haiku are outward looking, reflecting observations on the city and its people as they are passed or met and some are inward looking, the introspections of the traveller. The overall effect should be to give the impression of an individual being separate to and at the same time connected with the flow of life as it occurs in the quotidian; creating a kind of mantra, if you like.

I began to consider the possibilities of film as an enhancement to the project last year and was introduced to the young film maker, Zhu Bao, in late 2014. We completed the film in September 2015.

The film was shown at the Red Line Book Festival run by South Dublin Libraries at an event at the Civic Theatre, Tallaght, Dublin 24, on 14th October 2015 and again as part of another poetry event at the festival. The film was shortlisted for the Ó Bhéal Poetry Film Competition in 2016. 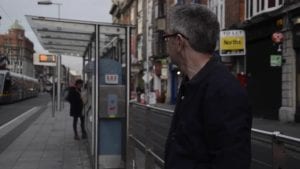 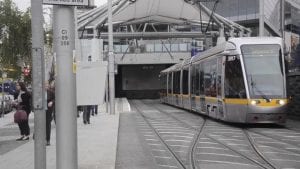 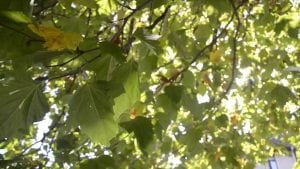 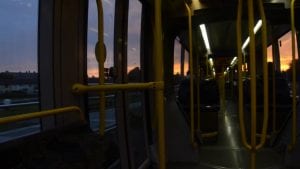 Brian Kirk is an award winning poet and short story writer from Clondalkin, Dublin 22. He was selected for the Poetry Ireland Introductions series in 2013 and Highly Commended in the Patrick Kavanagh Poetry Award in 2014 and 2015. His novel for children The Rising Son was published in 2015. His first poetry collection After The Fall is forthcoming from Salmon Publishing in 2017.

Bao Zhu is a passionate ﬁlm maker who comes from China. After achieving a bachelor degree of management in China, she decided to go abroad to pursue her dream of ﬁlm. She is currently a student studying television operation and production in Ballyfermot College of Further Education. She is on the way to starting a career via a camera viewﬁnder.

eyes bent to phone light,
night and morning cross without
either one speaking

Red Cow Bluebell bends
into Blackhorse Goldenbridge –
so many colours

seagulls on canal – how do they not miss the sea?

James’ s hospital
end of the line for many:
not for me – not yet

ghosts in Smithfield square
haunting the benches, the law
calls them out by name

dull meeting:
in a drab room opposite
a tired girl dresses

Angelus bell clangs
never sounded so foreign –
what country is this?

I hear my own voice
but I don’t recognize it –
who have I become?

on my own again
eyes always drawn to the door –
what are you watching?