You mistake it for a college band flyer or haunted house ad—faceless grim reaper, no, hoodie without a face—and this is why you don’t understand when six cops burst into your classroom, point pistols at your head, press fingers where bullets would go.

they say then turn toward your students but mostly your favorite, Lisa, who you’d bet a silver dollar on getting out. Guns aim: they die. Dead, you see for the first time how young Lisa is, how skinny, how black. Alive, you saw none of this, knew her by her smile. Front row, she’s smiling now, as though teeth could shield a bullet. The guns look at your students, and the cops say

and you die again. When they leave, you lock the door, sit in the dark together, just like the poster must have instructed. After an hour, Lisa admits she’s pissed herself. You walk out to see what’s really going on. This is California, so the center of the building has no roof; a tree grows in the courtyard. On the first floor, Mental Health offices. Second floor, Child Services. Instructors crack jokes about one-stop shopping. You could shop here. You find yourself cracking. You think of the next two classes you have to teach today—will guns attend? You think of the girl who came to class in her bra. I paid $20 for this. I want people to see it. It’s beautiful—and truth, you understand $20 because you live here, too, so you tell her to take a seat and continue lecturing on how it was, the mothers binding the babies’ feet, cutting off first their daughters’ toes then their heels. You teach about blood and where it comes from. You remember Ms. M just back from Iraq on the day you read “Ode to a Nightingale” out loud. At the line, “Thou wast not born for death,” she threw a chair at you and shouted, You want us to feel stupid. So you said, Outside, now. And there she fell and kept on falling like a baby in your arms. You offered a different assignment, a different way of talking to each other, another chance to tell her what you couldn’t before: you don’t know what a good chance is anymore, other than it implies something different might happen, and she asked, How can you not know? You’re the teacher. Her next paper was on the effects of PTSD and used what you taught about descriptive language to describe being raped by her own unit. Again you see the gun, Lisa’s face, and tears seem the only substitute for bleeding. You feel so full of blood you might break open. Lately you cry all the time, mostly in your car. This is California, so you can drive away half of every day, but you’re not in your car now, and Lisa’s waiting in the dark, wet and ashamed. When you ask the cops, they say you should have read the poster. When you ask the cops, they say they were just having a little fun. And you believe them, these men you talked to just the other day about pumping rubbing alcohol out of your neighbor’s belly. We’re just fighting to keep the whole thing from going up in flames, and you thought thing as in person when they meant thing as in neighborhood, and you felt lost at your own front door. Now you see Lisa’s smile—a light that burns nothing. There’s a grid you want to get on, help others get on, lines like a road toward being counted as human. You’d give anything for your car right now, to do as you teach: bet that silver dollar on yourself and get the hell out. To be seen, recognized, not for dead but as bleeding—you were dead, but now you’re bleeding. You look at the poster the cop put in your hands

Your Life Depends On It 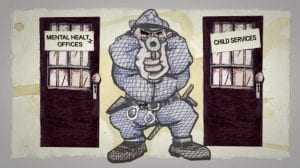 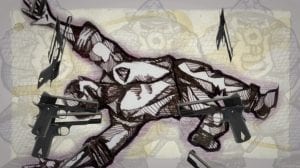 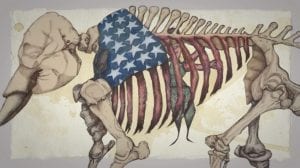 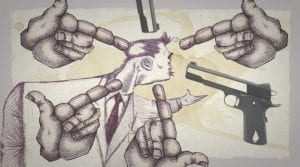 Nicelle Davis is a California poet who walks the desert with her son, J.J in search of owl pellets and rattlesnake skins. In the Circus of You is her third book. Her first book, Circe, is available from Lowbrow Press. Becoming Judas is available from Red Hen Press. The Walled Wife, is forthcoming from Red Hen Press in 2016. Her poems have appeared or are forthcoming in The Beloit Poetry Journal, The New York Quarterly, PANK, SLAB Magazine, and others. She is Managing Editor of The Los Angeles Review. She has taught poetry at Youth for Positive Change, an organization that promotes success for youth in secondary schools, and with Volunteers of America in their Homeless Youth Center. She currently teaches at Antelope Valley College.

Born and raised in Brooklyn, New York, Cheryl Gross is an illustrator, writer, fine art and motion-graphic artist, living and working in the New York/Jersey City area. She is a professor at Pratt Institute and Bloomfield College.

Cheryl received her MFA from Pratt Institute. Her work has appeared in numerous films, TV shows, publications, and graces the walls of many corporate and museum collections including:

Her illustration credits include; Jimmy Stewart and His Poems, Crown Publishing, Circe, Lowbrow Press, Becoming Judas, Red Hen Press, In The Circus Of You, Rose Metal Press, and The Z Factor, which she has written and illustrated. In addition to exhibiting and illustration, Cheryl writes a weekly column for Moving Poems.com.

Personal Statement: “I equate my work with building an environment, transforming my inner thoughts into reality. Beginning with the physical process, I work in layers. I am involved in solving visual and verbal complexities such as design, narrative and personal style where the quality on all levels is vital. Not one precedes the other, therefore shaping my world by using metaphors and allowing me to comment on the circumstances we are faced with as a comprehensive society.”

Cheryl’s work has often been compared to Dr. Seuss on crack.