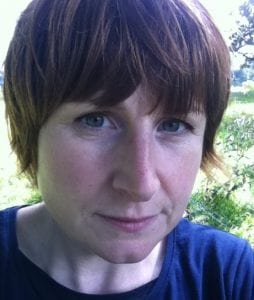 My practice-based doctoral project Experiencing the Filmpoem, investigates phenomenology through the production and exhibition of filmpoetry. Phenomenology is the study of subjective experience, embodiment and the relationship we have with the world. Filmpoetry is a filmmaking practice, characterised by the use of visual metaphor, spoken word and soundscapes to evoke personal affect and intimacy with the subject matter and themes, very much like the work of Scottish filmmaker Margaret Tait. The filmpoem extends from the traditions of experimental cinema and the avant-garde art and film movement of the early 20th century.

Phenomenology is the study of subjective experience, embodiment and the relationship we have with the world

In terms of exhibition, my research positions the filmpoem in relation to traditional cinematic settings and the reflective nature of site-specific moving image installations to better understand the connection between space and audience. To demonstrate the relationship between phenomenology and filmpoetry I adopt Edmund Husserl’s transcendental phenomenological reduction, a philosophy, which engenders the process of revealing the true nature or essence of an appearance through self-reflection. For example, images of autumnal leaves could denote the temporality of nature. To explore this further I adopt Laura U. Marks and Jennifer Barker’s research on hapticity (how we look at an image within a film to determine memories and emotion) and tactileness (how we think about an image within a film to determine how/what it makes us feel and remember). In 2016, I produced two filmpoems, West of Dalabrog and Dislocation, both of which illustrated themes concerning phenomenology and our emotional relationship to landscape and memory.

My new filmpoem, The Essence of Place continues my practice as research through my 2017 artist residency with the RSPB Scotland, Loch Lomond (in collaboration with SGSAH, Scottish Graduate School of Arts and Humanities). The RPSB’s brief was to engage a new audience to the reserve (and to the wider concerns of conservation) through artistic means. In terms of phenomenology, the concept of the film aims to connect place with the human body and consciousness. How can we embody the landscape? The essence of the film is revealed through haptic and tactile images of the landscape and wildlife within the reserve through seasonal changes, prompting our personal memories and experiences, while highlighting nature’s fragility.

Filmpoetry is a filmmaking practice, characterised by the use of visual metaphor, spoken word and soundscapes to evoke personal affect and intimacy with the subject matter and themes

Whilst filming, I met many people who shared their experiences and memories of the RSPB site with me. Most significantly, why this landscape was so meaningful to them. It was important to me for the project to be fully accessible to the audience, but to never loose sight of my wider research. The poetry focuses on how we can adopt place, as a concept and a physical presence, as a means to connect with memories. The audiovisuals not only demonstrate, through film form (colour saturation, camera movement and editing techniques) the relationship between concept and the representation of nature and conservation, but also, in terms of my phenomenological research prompts reciprocity and reflection by the audience. The Essence of Place will be exhibited outside, on a giant screen in the landscape of the RSPB reserve in October 2017 (date TBC).

Sources:
BARKER, J.M., 2009. The Tactile Eye. Touch and the Cinematic Experience. Berkeley and Los  Angeles: University of California Press.
HUSSERL, E., 1983. Ideas Pertaining to a Pure Phenomenology and to a Phenomenological Philosophy First Book. Translated by F. Kersten. The Hague: Martinus Nijhoff Publishers.
MARKS, L. U., 2000. The Skin of the Film. Intercultural Cinema, Embodiment, and the Senses. Durham and London: Duke University Press.