You don’t need an expensive or complicated lighting kit to make great poetry film, but you do need light and it’s useful to know how to make the most of it. Good lighting adds contrast, depth and energy to your images.

Daylight can be fantastic, but it constantly changes. You can boost light but using a pale/white reflector, out of shot. Try lining paper on the floor or hold a white card near the object, and see how much light it throws back. Light from more than one source can result in more three-dimensional feeling images. The long, warm light of sunrise and sunset is wonderful, but not guaranteed in the UK.

Existing Light
Existing or natural light; it is the light that happens to be on the scene. This could be light from: lamps, ceiling light, windows, candles, streetlights, direct sun, moonlight, headlamps, street signs, shop signs, light reflecting from water, fire.

Three-point lighting system
The basic standard lighting set-up consists of three main lights. All these can be created by using existing light and lamps.

Time of day
The magic hours for light are at dawn and dusk. The light of dawn is a cool blue, as sunrise is imminent, the light is flat and then, as the sun breaks the horizon, everything it hits becomes amazing hues of red and orange. Just before sunset, the colours can be equally as rich. These moments may only last 10 minutes.

The magic moments for light are at dawn and dusk. These moments may only last 10 minutes. Learn to use these moments of light – the biggest challenge may be getting up early enough!

During the day, light can be flat. That’s when you might use the weather for dramatic effect – rain, wind, snow.

Night
A good time to film outdoors is at dusk, just before it gets completely dark. During this time
you can use the remaining light from the sun and other existing lights will be on, such as streetlights and lights coming from buildings. This will result in more detail than you can get when the sun has completely set, but it can also look like you filmed in the dark night hours.

Another good time to film at night is just after it has rained, as everything is still wet, creating reflections and added light. Buildings that look uninteresting during the day provide opportunities for new narratives at night. Imagine how flat this image might look if taken during the day. 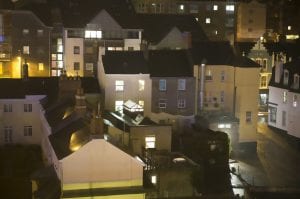 Film Noir
Film noir was created by filmmakers who were limited by their budgets and their technology. But they weren’t limited in their imaginations – that makes this an excellent starting point for poetry film makers! Use strong light and contrast to create a film noir style. (You can change your footage to black and white at the editing stage.)

Film noir uses low key lighting to overcome the flatness that black and white film could have if there is not much contrast. In Film Noir, the most prominent lights are going to be the key light and back light. 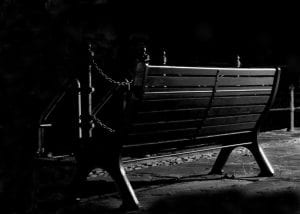 This image is from footage taken at Gloucester Quays.