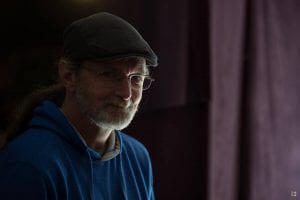 Paul (Founder and director of Ó Bhéal in Cork) was in Belfast to present shortlisted films from Ó Bhéal’s 4th International Poetry-Film Competition. The event, Reel Stanzas – Is This The Future for Poetry, was in collaboration with Quotidian (Belfast).

PFL:    What has poetry film done for poetry?
PC:      Poetry has been choking, gasping, and drowning because of the seventh art. Because of filmmaking.

The last hundred years of filmmaking has turned the world into visually oriented consumers who don’t read books anymore, or mull words over in their head, or allow their imaginations time to have some fun and think and be creative. Poetry films are opening that up to poetry again. It is going to draw a lot more people back to it; it’s going to make people aware of the intrinsic value of poetry. Poetry has rich kernels of immense potential that people are completely unaware of. I think that poetry films are going to do a lot with regards to that.

People are going to realise that because of the flexibility of the filmmaking aspect of it, they can now create completely new animals. People don’t realise it is a unique art form in itself. The fusion creates something else entirely. When that is realised it will become a lot more popular.

PFL:    Do you think of yourself as primarily a poet or a filmmaker? And when did poetry film come in?
PC:     I am a poet primarily.

I worked in the film industry in South Africa for a number of years and I ended up teaching script writing. I became very upset with the commercial side of filmmaking and the way producers came in and destroyed a script and turned it into a commercial form that had nothing to do with what the story was about to begin with.

So I walked away from the film industry quite angrily. The way I dealt with it was through poetry and satire. Poetry is what saved my creative self and my sanity.

“Poetry has been choking, gasping, and drowning because of the seventh art.”

I was teaching multi-lingually in South Africa and I started a poetry event. I was able to do bridge-work between the different language groups which worked really well. I was seen as a neutral body, and that was what allowed me to do it in South Africa among African people. I was not seen as a colonizer. The Afrikaans thought we were the common enemy of the English. From the English point of view the ex-pats were our closest neighbours. So we were friends with all camps.

When my contract ended in 2005 I decided to come back to Ireland. Three years later I was invited to the Zebra poetry film festival in Berlin. I had never heard ‘poetry’ and ‘film’ used together before. All the skill of my inner filmmaker woke up. I got very excited and drowned myself in poetry films in 2008! My own poetry film was accepted for the next Zebra festival, and I went over twice in a row. In between I got them to come to Cork to show the best of Zebra to a local audience. I also got the local college in Cork to implement poetry filmmaking into the undergraduate filmmaking course.

PFL:    You were born in Cork and you now live in Cork, but you lived in Johannesburg. How did that happen?
PC:     When I was eleven, my parents moved to South Africa.

I went to an Irish Christian Brother college. I was two years younger than everyone in my class and it was apartheid South Africa. This was a huge identity and culture shock. It took me a number of years to figure out what was going on in the country. As a result I left school young. I was fifteen so my independence came very early, but my identity came much later.

South Africa was very traumatic in a lot of ways. I was cut off from my childhood friends, I didn’t even have a chance to say goodbye to them. It was as if an early part of my life had been erased. It took me many years working out what I wanted to do, where I wanted to live, and my own identity. As a result I speak six languages and have had maybe forty kinds of jobs. I’ve worked in Switzerland and Canada, and have done a lot of travel.

PFL:   There is a broad international poetry film community, but engaging people locally with poetry film can be hard. Tell us about Poetry film in Ó Bhéal.
PC:      A year after Zebra had come to Cork, I decided to dedicate one night of the year to poetry films. I chose the night that is close to the Cork film festival. We do the same with jazz; we have a jazz poetry night. The first year, I surfed the net and looked for a selection of films to screen. After doing that for two years, I couldn’t find good ones, so I set up a competition. Last year there were one hundred and sixty entries, from thirty countries.

Now, every week, we screen poetry films for an hour before Ó Bhéal begins. They are chosen at random from a huge pool of over three hundred poetry films. We are now seeing a lot more people coming in early to see the poetry films and much bigger turnouts at the poetry event. People are really opening up to it. Poets love it, filmmakers are coming in the door, and local poets are going off to find filmmakers to work with. The bug is happening!

“For someone to come to you and say ‘I would like to turn your poem into a poetry film’ – that is a wonderful gift!”

PFL:    What is a ‘good poetry film’?
PC:      We are looking for the right balance. When you put the two art forms together there is the third thing that happens; you know when it has been achieved. It is difficult to describe.

It is possible for a filmmaker to create visual art and for a poet to then interpret it in words, and then to create a poetry film in that way. But the most common place to start is with the poem first.

The filmmaker does not usually have a lot of poetic insight. Their insight is in the poetry of the visual, so the collaboration becomes extremely important. If the poet and film maker aren’t the same person then the process of translation from poem to visual interpretation needs to be a collaborative one, so that the filmmaker truly takes on board what is happening in the poem and embodies, or at least has a good understanding of its mechanics. There are a lot of lazy filmmakers.

PFL:    What is the responsibility of the poet?
PC:      They have none per se. Always only up to the level the poet wants to be involved.

If the poet is involved in the process, then the responsibility would be to answer whatever questions the director has, and to take enough care to ensure that the director has the wherewithal to interpret the poem.

PFL:   Is there a distinctive flavour of poetry film in Ireland?
PC:      Only in as much as there is a distinctive flavour to the poetry. We haven’t seen enough films yet. There are not big budgets, which is a good thing to keep it more innovative. We now have a whole generation of filmmakers in Ireland. In the 90s we didn’t have any film schools. We had to go to Goldsmith’s and to London; people couldn’t afford that. Suddenly we have film schools all over Ireland.

PFL:   To what extent is the collaborative nature of poetry film an obstacle to poets who are used to working on their own? After all, often, the poetry film is seen to belong to the filmmaker.
PC:      Belongs to the filmmaker, with permission, yes.

But get off your high horse. Have a bit of humility and great gratitude for your work to be produced in this way. For someone to come to you and say ‘I would like to turn your poem into a poetry film’ – that is a wonderful gift!

Poets need to get out of their control zone and out of their comfort zone, and collaborate more. That will feed back into their work and into their personal relationships, which often suffer because of the isolationist nature of poetry. So it’s really good for poets to come out of that and into the collective space, letting go of complete ownership of something new, yet being part of it.

Paul’s plans for Ó Bhéal, Cork’s weekly poetry event, are growing. A new partnership with four festivals in different countries has started and if European funding comes through poetry film workshops will be developed. Meanwhile Paul continues to run the weekly event in Cork, putting on eighty poets a year. He has a team of twelve people to alternate comparing etc. Revenue grant came at the 11th hour this year – thank goodness – it will enable Ó Bhéal to move into their next exciting phase.

Paul Casey was born in Cork in 1968 and has lived over half his life in Southern Africa. He has worked mostly in film, multimedia and teaching. His recently published collection from Salmon Poetry is Virtual Tides (2016), which follows his debut, home more or less (Salmon Poetry, 2012). A chapbook, It’s Not all Bad, appeared from The Heaventree Press in 2009 (Free to read at this link: http://www.paulcaseypoet.ie/ItsNotAllBad.pdf). He completed a poetry-film in 2010 based on Ian Duhig’s poem, The Lammas Hireling, which has since featured on the Sorbonne curriculum as a teaching aid. In 2013 he was awarded a Cork City Council Artist’s Bursary. His poems have appeared most recently in The Wolf, The Irish Times, The Rochford Review, The Enchanting Verses, Arté Metropolis TV and in the anthologies, Looking at the Stars, On the Banks, Even the Daybreak, Blackjack, The Deep Heart’s Core and the Cork Literary Review. He teaches creative writing at Cork College of Commerce and curates the Unfinished Book of Poetry, featuring verse from Cork city schools. He is the founder/director of Ó Bhéal at www.obheal.ie.