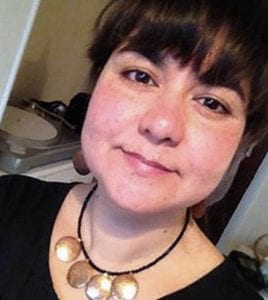 We sat with Lucia in her flat in Swindon before the landlord arrived to discuss her upcoming move, we talked about Lucia’s journey with poetry film. Lucia is an environmental scientist. Born in the U.K. and brought up in Bolivia, before returning to the U.K. when she was 19. Between then and the time we met her, Lucia had also lived in Santiago Chile, London, Brighton and Oxford. Lucia now lives in Bristol.

PFL: What was the first poetry film you made?
Lucia: When I first moved to Oxford. I was living alone in a vicar’s house because they went for a holiday and I took care of their house for one month … I started my job at the same time. When I walked from the house to the bus stop it was a beautiful walk. I had come from London before and this was a nice treat. I wanted to capture it, so I did a small recording on my phone and did my recording of my usual walk to work, which was almost like a tunnel of vegetation. It was a little bit scary but it was very safe. I did some different days and I didn’t think of doing poetry, I just put some music to it.

PFL: You have a distinctive style. Dark and light meet together and there is also a sense of looking ‘through’ toward the light. There are often dark frames created by trees or something else that you’re looking through, as if you are spying.
Lucia: Yes I do like light a lot. I like especially shimmery light in water and things like that. It gives a moment a special magical situation I feel. They are dark because I am not a sad person but I have my moods and I am very in touch with my emotions. I think it is a matter of finding beauty in something that is like a tunnel. Because the first video I made was a tunnel it is something that draws my attention. Also if it is a shape of a tunnel and light is in the middle it focuses attention more to the object that I am looking into maybe.

The spying because I think when I see the spying shots, it makes me feel part of it. I don’t know where that comes from, maybe childhood. I like the effect that spying has on the observer or the reader of the poem, even though I am the creator. It is an intuition, it feels good. What feels good is to record the images – observing, but not being observed, not being part of the picture.

PFL: What is your favourite poetry film you’ve made?
Lucia: The favourite, because it’s funny, is the one of the rowers it makes me laugh. When I was living in Oxford I walked along the river, you will never look straight towards the rowers because it is intimidating, a bunch of men – you don’t look at them. But because I record them I can look at them – it makes me feel I have done mischief!

PFL: What process do you follow to make a poetry film?
Lucia: I don’t have a set process, it’s random … every time I walk I record what I like, what is beautiful, then I write poems, sometimes for the video that I have put together, but sometimes the poem already exists and I look for what I have. I don’t have a set process. Sometimes a poem has to be modified. For example, Far Away Long Ago, is a longer poem but I could not put all the writing into the video and shorter was better.

PFL: Did you teach yourself?
Lucia: Yes, stumbled upon it. I had basic video editing, I wanted to do more things. I bought Power Director and I taught myself.

PFL:  Is religion significant to you?
Lucia: I am a spiritual person but I don’t go to church. I respect the stories behind religion. I like the mysticism of religion.

PFL: Does that become a part of your poetry?
Lucia: If it is then it isn’t conscious.

PFL: How do you come up with music for your videos? Do you hear the sound?
Lucia: Sometimes I have a song I like and I have to have a video. Sometimes I do the video and then the music comes, or I search for it. At the beginning I had songs that I wanted to put stuff into. Then things shifted, so it is random.

PFL: How many poetry films have you made?
Lucia: I’ve made over thirty but not yet 40.
[NOTE: Since the interview Lucia has now made over 60 video poems.]

PFL: When you started making poetry films, did you know there were lots of other poetry film makers?
Lucia: I thought I was the only one, obviously I’m not!