Remember is the collaboration between Mab Jones and Alex Taylor as part of the Disappear Here project in Coventry. Alex Taylor’s existing drone footage was given to Mab Jones who then watched it and told us that ‘the words were coming .. the poem flowed out’.

Disappear Here is a project involving 9 poets and 9 filmmakers making 27 poetry films which explore the Modernist Brutalist superstructure of Coventry ringroad. The other films in the project can be found at http://www.disappear-here.org/blog/ 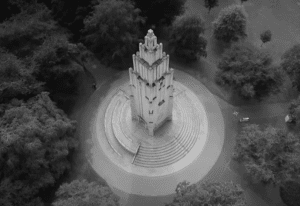 Bios
Mab Jones
Mab Jones is a “unique talent” (The Times) who has read her work all over the UK, in the US, France, Ireland, and Japan. She is the author of Poor Queen (Burning Eye Books, 2014) and take your experience and peel it (Indigo Dreams, 2016) which won the Geoff Stevens Memorial Poetry Prize. Mab teaches creative writing at Cardiff University, writes for the New York Times, and recently presented a poetry programme on BBC Radio 4. She also runs International Dylan Thomas Day. www.mabjones.com