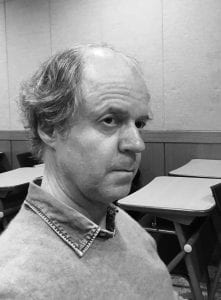 About myself I’m an artist, writer, filmmaker, and occasional musician, and live with my wife in South Korea. I’ve published art and writing in The Partisan [upcoming], Pacifism21, Former People, The Puritan, Eclectica, Canadian Notes and Queries, Rain Taxi, The Brooklyn Rail, The Korea Times, Dogmatika, Dark Sky, the Quarterly Conversation, rabble, the HUFS International Journal of Foreign Studies, The Toronto Star, Globe and Mail, Now Weekly, The Canadian Forum, This Magazine and several other publications. I’ve had group and solo shows of of my artwork, have written and staged two fringe plays, and invented a new genre of experimental movie (the “authorial movie”, in which the basis of the narrative is a belletristic text, such as a poem, short story or movie, and one person – one author – produces all elements of the video, such as text, art and music (for more examples of these, see the links below)). Finally, I blog at Conversations in the Book Trade, where I have conducted interviews with people including Adam Bellow, Ian Brown, Philip Marchand, Bev Daurio, Brian Palmu, derek beaulieu, Ed Champion, and Richard Nash.

Below are two poems connected by a concern with what might be termed “the spectrum of apocalypses”.

All also exist as video poems. And the artwork here is my own.

“Snow in the Temple of Memory and Hope” and “The Violence of Sadness” are all about my brother. I don’t know what to add at this point. He was a very gifted guy with the poet’s disease: booze. It drowned him – hideously. And that spiral of self-destruction was aided and abetted by another family member. It was a tragedy of addiction, and a tragedy of wishful thinking and enabling. There are whole layers of sadness here.

Need, as the cliche has it, is a human as being itself. But need can get away from us, can spin out of control. This is certainly the case for artists, who, while not markedly prone to addiction than other segments of the population, certainly are fascinated by addiction; and that fascination carries with it a dark pull; sometimes artists are pulled into the vortex of addiction almost as if hypnotized. This was certainly the case with my brother, who died of alcoholism around four years ago, was a poet and visual artist, and who was surrounded by other artistic personalities — often with their own struggles.

About the videos: The videos are important to these works. I did all the work in them. I’m not saying that to showboat but to underline what I think will be one of the central sources of cultural tension in the upcoming decades: that between new media work (generally group-made) and text-only material … possibly with graphic fiction providing a bridge between the two. The way I see this tension as playing out is there will be increasing anxiety on the part of more “traditional” artists, and the whole question of what one work of art by one artist is will come to the forefront. I call my movies “authorial movies” because they are based on literary works (poems or prose) but also because they are made by one creator – one author. It is in this way that I hope to make a connection between new media and more traditional forms. I have made well over a hundred similar movies, including three features. (Most of this work is not publicly available online, but I am providing you with links.)

Finally, about “The War on Smog” – we’re choking on pollution, obviously – but one reason is because we pour such great quantities of energy into war’s (gas-guzzling) machinery. I’m surprised more people haven’t made the connection that militarism is, in many respects, an environmental issue. Long after various insidious groups are liquidated, we will still be left with the pall – the choking residue – of our efforts.

Snow in the Temple of Memory and Hope

Fade in.
It’s a cold day’s end
In downtown Montreal.
The sidewalks are
Crowded with office workers
And students –
The employed and
the employment-wishing –.
There are others, too, on the streets;
They linger more than walk,
And so, logically, should be extra-visible.
Yet, in the eyes of the stressed-out,
Society’s bustling winners,
This last group –
Impoverished, and too degraded to wish a salary –
Discarded and loosened,
And loose-change desiring –.
Does not exist at all.
All these street people are, in the eyes of the healthy,
The ranked successful,
Existentially gone, 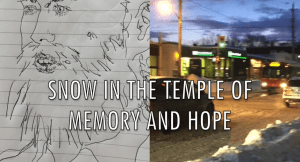 Existentially vacuumed.
But my brother sees them.
He sees them
With pity
And multi-tiered fear.
He, with his bad skin, bulging belly, dirty coat,
Smelly hat,
Is, in fact,
Close to being one of them;
He wants what they’re often pan-handling for –.
he’s carrying it, glass heavy,
In his hand.
But even though his attention
Is focused on them
(the normal people disgust him),
When he sees their wrecked faces –
Francophone pale,
Inuit tan,
WASP red –
His heart goes out to them.
But despite this unfaked, comradely empathy,
His anxious desire for distance is primal,
Instinctive.
His food supply
(Correction: liquid bread)
Shall not be shared,
Shall not be depleted,
And so he carries the
plastic bag,
Filled with bang-clinking
Full liters of Colt .45
(And for, good measure,
one bottle of Blue),
And proceeds down Parc Avenue,
As determined to ignore the street people
As the office types
And pain-virginal McGillers.

The sidewalk is so frozen
Its slushy, then freeze-dried curlicues of kick-coloured ice
Are striated
Into clumsiness-causing shapes.
It’s hard for pedestrians
To keep their footing.
“Got any change?” a man’s voice says.
My brother turns to it.
He thinks: a native guy –
Indian or Inuit,
He can’t figure out which.
He likes the man’s voice.
(In reality, the man is neither:
He’s a Chilean who was a refugee
Then a regular guy with a regular job
And a marrow-painful past:
It all
Crashed –
There’s only so much
One bodysoul
Can take.)
“Got some extra change? I need some food.”
My brother looks at the homeless guy;
His face is oval,
His skin is pocked –
Handsome and haggard at the same time.
He has good features that’ve been
Kicked around.
The homeless guy looks at my brother –
He has pales skin with cheeks both white with too much inside
And rawly reddened
By the cold.
But the reddening continues;
It climbs up the bridge of his nose
Like an ant up a tree,
And is on either nostril
Like red lights on a toy car.
And he has a big, bushy beard –
A beard so thick that it
Looks animal:
Rough and wild
And flecked with odd substances.
My brother looks at the homeless guy
And knows he’s a drunk.
Inside his mind-guts: shame
That the homeless guy – whose eyes seem fixed
On the plastic bag in my brother’s hand,
With its four-bottle content,
Knows him, too – sees through his privilege and his apartment and his
Spoiled doom.
Sees him as a drunk
Without even the courage
To plummet.
A moment of humiliation
Suddenly bursts.
“Sorry,” my brother mutters.
He walks on.

The earth,
Which has been continuing its spin
Has moved Montreal farther
From sunlight,
And now the cloudy winter sky
Is at its deepest evening blue
And grey.
The temperature drops another degree.
The ice on the sidewalk
Hardens its unevenness,
And cold water
Begins to fall.

My brother hears a plaintively vulnerable cry –
The shrunk meowing of an animal baby,
And spots a little cat.
It’s a tiny creature
Maybe an adult whose size
Has been limited
By limited food.
The cat’s face – direct, humourless,
Ignorant of charm –
Looks right back at my brother,
Its mouth opening (teeth looking like model dinosaur fangs).
It meows again –
Meows rights into my brother’s heart.
My brother stoops to pet it,
The dear creature;
Stoops with his blurry, badly coordinated balance –.
Clunk-heavy clink –.
The cat flees, and my brother, straightening,
Harrumphing at this feline snub,
Doesn’t notice that his grip has weakened.
Kee-RASSSHHHH!!
The bag of heavy bottles is snatched by the earth’s gravity
And breaks cleanly and multiply
On the hard street.
“Fuck, fuck, fuck! Godammit! Shit! FUUUUUCKKKKK!!!!!”
Passersby glance at my yelling bro,
And close their nostrils
Against the broken smell
Of spilled beer.
‘FUUUUCCCCCKKKKK!!” My brother’s rage is boundless –
And useless.
Cold, cold, cold.
He staggers another block
And turns his head
To the omniscient sky.
It, too, has its way of blinking.
Flakes of snow,
First tiny with cold tentativeness,
Are falling from the sky,
Then bigger.
These flakes,
Like spittle,
Fall on my brother’s face
And the memory of childhood
Fills him with such absoluteness
It is like –

Recalled: Ottawa, 1969 –
Walking with Mom, Dad and me
To a neighbourhood rink.
outside sensations:
The feeling in old, gone memory
Of living on a quieter, nobler planet –.
The feeling of great, pervasive quiet.
The feeling, too, that the past equals the present,
And has the power to enter it.
Inside sensations: our rickety home,
Our bright kitchen.
Skating for hours outside,
Returning to heat.

My brother suddenly remembers the homeless guy
And feels a big regret.
He feels like he just let down a friend.
He backtracks,
His movements a little more agile
Than they’ve been recently;
Like any addict, being denied his addiction
Cheers him up.
But the homeless guy’s spot is empty, now
The past is shoveled aside by the present.
Friendship-potential is – these are the odds – usually bombed into oblivion
By reality.
My brother keeps walking,
His face and hands
Turning more and more raw,
And he leaves the present
Once again,
And he walks down side-streets that are
Concrete portals,
Simple temple doors,
To childhood
And past.

The Violence of Sadness

Meeting my brother the last time. From a long work entitled “Family Maps”, and including the song “PoemSong”. In effect, I am taking the authorial movie concept farther. This is both author-made videopoem and song.

The War on Smog

The bombs are smart
Even against camouflage,
And they drop their loads
With a righteous
Boom.
We are saved frequently
By these awesome systems.
They save us
From emergencies
And all the,
All the bad guys. 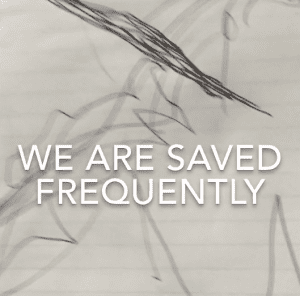 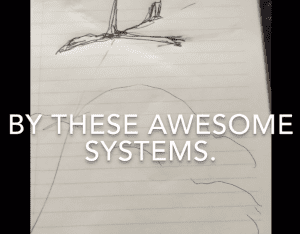 I’m an artist, writer, musician and filmmaker living in South Korea. I’ve published in a large number of literary journals, and presented at conferences in Oxford, Liverpool, Bath, Berlin, Dubrovnik, Osaka, Seoul, and Youngju. My artwork and film has been shown in Canada, Cuba, the US, U.K., South Korea, and Greece.

I’m particularly interested in the following themes: nature and the anthropocene, addiction and family dynamics (my late brother’s story), and technology and contemporary war. I usually make
videopoems that I term authorial movies; these are movies in which one person creates — authors — all elements of the movie.