There are two voices in the leaves arguing

in the leaves a dark voice

a quiet voice   in the leaves   like a hoof

stomping  bent  in the leaves  straight

bent   straight  in the leaves  that sound

when a bird   in the leaves   lifts its weightless

feet  from the leaves    not weightless but nearly

erasing the border  between body and leaf

a crashing  in the leaves   from mere ounces

and sycamores  reach horns bleached by

a roadside    horns fallen in the fallen   leaves

shoulder to the shoulder of the November road

hooves in the leaves   the weak feet of vultures

in the leaves   the sound from the bodie

and leaf-colored clothes  standing   in the leaves

the smell of the wet, dead  leaves  under the leaves

and what is the soul, what stays in   the leaves

or what leaves?  When it’s quiet it will be safe

to leave what I was   in the leaves 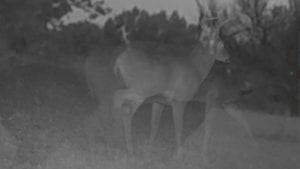 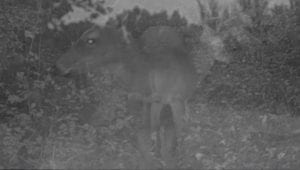 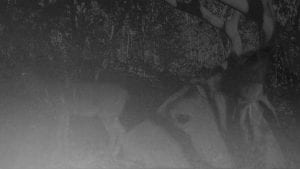 Deer & Ghost of Deer. The piece is part of a larger project about borders which was just awarded an Artists 360 Work-In-Progress Grant. One aspect of the project is to explore the borders we create between development and nature and the tension that exists between the two.

Carolyn’s poems have appeared in The New Yorker, Agni, Phoebe, Harvard Review, Bomb, Boston Review, and many other journals, including Poetry Film Live.  Her sixth collection, How Much Of What Falls Will Be Left When It Gets To The Ground?, is forthcoming from Tolsun Books. Among her previous books are Spoke & Dark (Red Hen, 2012) and Quarry (Parlor, 2008). Carolyn’s website is carolynguinzio.tumblr.com.

One thought on “DEER & GHOST OF DEER”