That Other Anima by Julia Wendell

I know only a little
about letting things go,

trying to contain them,
moving my gaze

My daughter, for instance.

The closer,
the easier to manipulate.

The farther out,
more flash and thrill.

My fingers tease
the delicate rein—

,
The feeling,
the connection.

A westerly current
pulls her with it,

until a wind gust spins the parafoil,
plummeting earthward,

test line,
to tangle at my feet. 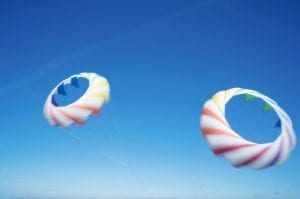 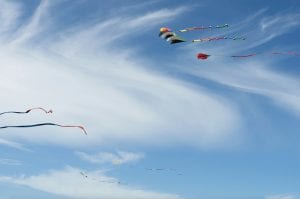 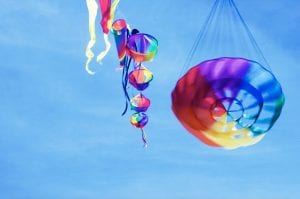 Julia Wendell’s most recent book of poems is Take This Spoon (Main Street Rag Press, 2014). A Yaddo and MacDowell Fellow, she is the author of several other poetry books, as well as a memoir, Finding My Distance (Galileo Books, 2009). Her new memoir, Come to the X, will be published by Galileo Books in 2019. Several of her most recent video poems that combine poetry, piano, and video have been published by Real Pants and Free State Review. She is an International three-day event rider and currently lives in Aiken, South Carolina.

Sally Gall is a photographer living and working in New York City.  In addition to her fine art career, she teaches photography and creates commissioned work. Gall has been awarded several prestigious fellowships which include two Macdowell Colony Residencies and a Rockefeller Foundation Bellagio Fellowship.  She has published two books, The Water’s Edge, Chronicle Books, 1995, and Subterranea, Umbrage Editions, 2002. Gall is looking forward to her 13th solo show at the Julie Saul Gallery in December 2018 to accompany her upcoming book “Heavenly Creatures”.

Process Notes
“For “Heavenly Creatures,” I knew that I wanted to build a project around Sally Gall’s kite photographs. They were so expansive and such intimate images. Approaching her was easy. We had known each other for years since she was married to my ex. I encouraged her to suggest a piano piece that she felt would complement the photos. She selected Satie’s Gymnopedie No.1 to reflect the floaty, meandering, contemplative feel of the images. The poem came last, which is an unusual order for my video poems. Normally some version of the poem exists before the project is imagined. The kites exemplified for me the illusion of control between mother and daughter, and in her case, mother and stepdaughter. The temptation to keep close is always there, but the real mastery and self-development happens once the line is let out and the person is allowed to develop her own independence, her distinctive “flash and thrill.” Between mother and daughter, two anima are at play, not anima and animus, but one anima and then “that other anima,” that other self, our daughter, who is and is not attached to us, like the kites.” —Julia Wendell