One/Another
Because we are not unlike my fitful car, which is in the shop
I’m waiting for the #35 bus and thinking about the ways
you and I cross the line. That night I shouldered open
your apartment door after hearing another man’s laughter
coming from within. The happy hour you cold-cocked
a cocktail waitress for calling me Hon. Some party where
we fought in front of everyone before sneaking off
into a bedroom closet to “make up.”

Mulling the litany of star-crossed choices that have pushed us
to the edge of this morning, I see what we’ve become
in a shadow-play memory of you, risen for your early flight
pausing at your hurried packing to rake fingers
through a mane of hennaed hair.

Kissing my forehead as if consoling a knee-skinned child
you took off, only to land a coast away at LAX where he waited
behind his wounded grin at the baggage claim, this recently jilted
man you made sure to mention was once your lover, though now
is just a friend in need, or so you swear.

I slept late, left your bed unmade, rifled through your underwear
drawer noting the absence of apparel I’d bought for you
at Hollywood Nights. Then I salted your goldfish bowl
and set out for the first open party store I could find.

It made for a day of long thoughts: the two of you going bar to bar
down Sunset Strip. Your condolences spilling sloppily onto
the sympathy sex I imagine you having back at his place
once the shots sink in.

Brief because I don’t imagine it will take long for a certain
ex-friend of yours to make up her mind as she smiles through
the open window and across the passenger seat of my wreck
of a soul-killing though newly repaired car and says, Sure
I’d love to have a drink, before sliding in next to a man
she’s never seen before without you by his side. 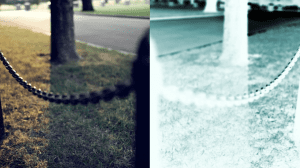 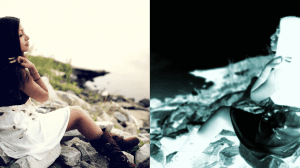 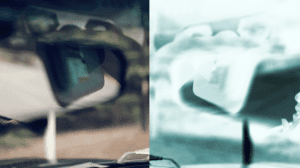 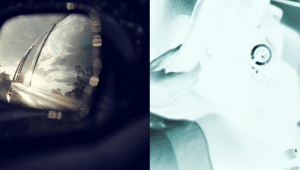 Filmmaker/Poet Bio:
Matt Mullins writes and makes videopoems, music, and digital/interactive literature. His work has been screened at numerous festivals in the United States and throughout the world including Visible Verse (Canada), Zebra (Germany), Videobardo (Brazil), Liberated Words (England), Rabbit Heart and Co-Kisser (USA). His fiction and poetry have appeared in online and print literary journals such as the Mid American Review, Pleiades, Hunger Mountain, Descant, and Hobart.  His debut collection of short stories, Three Ways of the Saw, was published by Atticus Books in 2012 and was named a finalist for Foreword Magazine’s Book of the Year. You can engage his interactive/digital literary interfaces at lit-digital.com.

Process Notes:
I wrote the poem I recite in this piece about twenty years ago when a romantic relationship I was in was coming to a bad end (as I think the poem makes fairly clear). I published the poem in a literary magazine and promptly forgot about it. An entire life later (as in a few months ago), I was looking for stock footage online for another project I’m working on, and I came across the footage in this piece on the public domain site mazwai.com. The original footage is actually a fashion ad (I think) complete with sappy aspirational music. It’s beautifully filmed, though somewhat slick and representational of cultural signifiers I don’t agree with. However, I first saw this footage with the volume off and immediately the poem I hadn’t thought about for twenty years came flooding back into my mind. The woman in this video looks nothing like the woman from the relationship that inspired the poem (and no I didn’t really salt her goldfish bowl—she didn’t even have a goldfish…or did she?), but something about the footage brought that poem back to me. I put the footage in its entirety into split screen to deal with the duality of both memory and the yin/yang of a relationship on the wane (it wasn’t all bad between me and that woman), then I offset the timing of each half just slightly (because memory and our feelings about the bittersweet are always a bit off, right?). I kept the score sparse and read it dry without watching the footage as I recorded. Then I put the audio over the video and everything just miraculously lined up. I was actually rather shocked at all the subtexts that I saw emerging just by the placement of the words into the imagery. The way her eyes blink in a kind of cringe at the mention of “…the crooked fuck…,” the fact that there’s a car in the opening of the piece where I use the car metaphor, the way she runs her fingers through her hair at the exact mention of it, and the phallic fence post that appears at the mention of the former lover out in LA. I didn’t sync any of that. It just happened naturally. I made some minor tweaks to tighten it up, or course, but overall this was a very organic process. Every now and then a piece just falls together as larger forces we don’t control seem to align. For me, this poetry film was one of those. A cosmic collision of my then with my now.