I have a memory of you in Peterchurch.
We are in the car, parked near the gate.
I’m impatient. I want to go right now
and see the church, because I love churches,
and what’s inside? Memorials? An ancient font? A brass?

You are absorbed in the map to work out
the best way back. I open the car door
and say, “Come on!”, and you say, “No. Wait.”
In the avenue, leaves fall through sunlight.
Dry grass. Wet leaves. In Golden Valley.

It’s afternoon and we are coming back from Hay.
Leaves and sunlight. The first smells of Autumn.
Dry grass. Wet leaves and a hint of bonfire.
But we have never been to Hay or Peterchurch,
so this must have been with someone else,

but I can’t think who. There is no man I know
who would sit there so calm and stubborn.
Perhaps it wasn’t Peterchurch
and I have confused two memories.
A church and leaves. A man with a map.

When I remember this I can’t seem to change it.
We are still there, in Peterchurch, Golden Valley.
I say “Come on!” and you say, “No. Wait.” 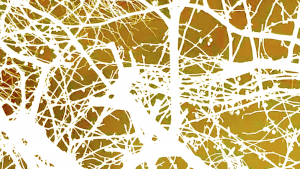 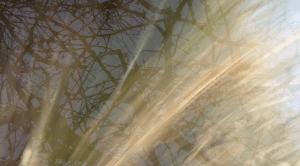 Process Notes:
This film poem is a collaboration between myself and Lucy English for her excellent Book of Hours project/website, something I’m really pleased to be involved with. This is the second piece we’ve collaborated on for that project, and I believe we’ll be doing a third (also about memory), which will give us a nice triptych of memory poems. In terms of process notes, I think the email exchange I had with Lucy after first showing her the completed poetry film does well to explain my thinking in terms of how I put “Still There” together:

From Lucy’s email:
Thank you very much for this Matt. I really liked the spinning effect to create the impression of churning memories, and how you have used the noises from the car door. It’s quite a ‘chatty’ poem so I think that the pared down filmic approach is a good one or this would get too cluttered up. I liked the ‘long’ ending too as the swirling shapes settle into something recognisable but still don’t give an ‘answer’ to what the narrator can or can’t remember.

And my response to her email:
Another thing I was going for that you may have picked up on is the idea of people/situations at odds with each other (she wants to go in, he doesn’t). The angular background of branches juxtaposed against the circular spinning footage, the melodic guitar line juxtaposed against the more surreal background processed guitar — things at odds.  I also tried to weave a narrative into the subtext:  the car door closes in the end and we hear someone walking away, by which I mean to imply that the speaker of the poem has left the man in the car and gone on into the church alone, though that might be a bit too subtle for people to pick up on.  Anyhow, it was a pleasure to work with your excellent poem.

Beyond our email exchanges I can say I wanted that swirling versus that poky/twiggy rigidity so the voice could flow over it. I also wanted those abrupt shocks of bristly clarity when the spinning stops and the prickliness is laid bare, only to diminish when the swirling fades back in—it’s so those little sharp points of a memory stick out, like they often do, even as the rest sometimes remains blurry. Also, as an aside, I have to reveal what that spinning footage actually is. I found it on youtube. What let me to it, I don’t remember, but it’s a GoPro camera falling from about 10,000 feet and landing in a field. Apparently a group of men went skydiving, and the camera got knocked off the owner’s helmet and fell to Earth, filming all the way down. You can watch it here:

It’s one of the most mesmerizing pieces of film I’ve ever seen. You can see the skydivers fall away from the camera, then as the camera begins to spin faster and faster the landscape below becomes this amazing surreal swirl, which keeps evolving as it descends. Finally, after about 2 minutes of this, it lands in a field—and isn’t smashed to bits! It just sits there in the grass. That stunning stop of motion after all that accelerated spinning blows me away every time I see it. That’s the moment I timed with the slamming of the car door in the end. Apparently the camera was eventually found intact by a mycologist (i.e., mushroom scientist) whose son posted the footage on youtube in the hope that the owner of the camera would contact them. 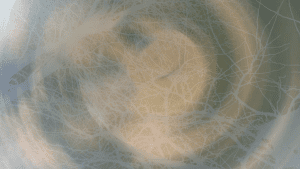 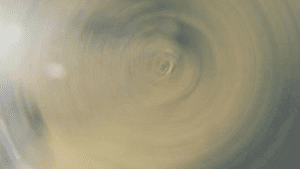 Lucy English has toured widely in the UK and the US. With the South West Collective she co-wrote Flash, a multi media spoken word show, which toured the UK in 2010-11 and also Count Me In, which toured from 2014-5. Both tours were sponsored by the Arts Council. In 2005-7 she ran a series of performances and workshops for the British Council in Sri Lanka, India, Thailand and Taiwan for their animating Literature Programme. She is the co-organiser of the Mix Digital conferences at Bath Spa University and the co-organiser of Liberated Words, which curates, screens and creates poetry films. Lucy English is a Reader in Creative Writing at Bath Spa University. She is currently studying for a PhD in Digital Writing.

Matt Mullins writes and makes videopoems, music, and digital/interactive literature. His work has been screened at numerous festivals in the United States and throughout the world including Visible Verse (Canada), Zebra (Germany), Videobardo (Brazil), Liberated Words (England), Rabbit Heart and Co-Kisser (USA). His fiction and poetry have appeared in online and print literary journals such as the Mid American Review, Pleiades, Hunger Mountain, Descant, and Hobart.  His debut collection of short stories, Three Ways of the Saw, was published by Atticus Books in 2012 and was named a finalist for Foreword Magazine’s Book of the Year. You can engage his interactive/digital literary interfaces at lit-digital.com.