Savouring their last moments’, a couple struggle with letting go. They must, but breaking up is hard to do.

This short film is based on an original poem written by Patrick Errington. The poem was commended in the National Poetry Competition 2016, Poetry Society ( UK ). This film was commissioned by FilmPoem and original adaptation was produced entirely in Fujairah UAE.
Never Say Never Say Never. Starring Layla Al Khouri & Sanoop Din. Narrated by Evan G. Willikers. With music score by Heidi Susanna (aka Heidi B) and assisted by Zeeshan Ahmed and Max Bretherton. This short film is based on a poem by Patrick Errington, commended in the National poetry prize 2016 for Poetry Society.

The film was commissioned by Filmpoem and filmed in Fujairah UAE.

Text of the poem can be found on the Poetry Societry website. 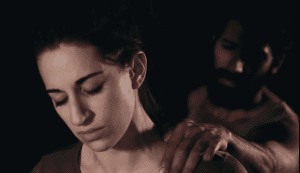 Adele Myers
Adele is the founder of Bokeh Yeah! DSLR academy in Manchester UK, and also creates her own short films. Adele has now moved to the UAE to teach video production to Emirati women.

Patrick James Errington is a poet and translator from the prairies of Alberta, Canada. Winner of The London Magazine Poetry Prize 2016, his poems have appeared in numerous magazines and anthologies, including Best New Poets 2016, The Iowa Review, American Literary Review, West Branch, Cider Press Review, Copper Nickel, Diagram, The Adroit Journal, and Horsethief. A graduate of Columbia University’s MFA programme, Patrick currently lives in Edinburgh, where he is a PhD researcher at the University of St Andrews.