Celestial dialogue I: Sun and Moon

Your voice haunts me
in the long backstreets of our entwined thoughts.

Your rhythm echoes
as I read the silence in-between your and my words.

Our double kiss casts a circular shadow on everything we touch,
splitting in two people’s minds and hearts.

The world beats us thin, to almost transparent,
mirroring with each other
and the time without a beginning or an end.

Love me to break away from the past,
To create a new self,
To draw a line,
To cut the time into two halves,
so we no longer know who is you, me, and who is us.

Scald me with your light, write over and over new scars,
the day will set them free.

You are with me, even in the darkest night ,
piece by piece recreated by the stars.

Take my hopes and I’ll let take you to the limit
of our kneading, till we don’t know
who is the broken-hearted
and who’s the sky’s king.

Fulfilling an old promise of fidelity,
we empty ourselves
into the silver lining in-between the clouds.
We splinter time and space,
committing a sin
with the oceans and the bays.

For a thin slice of eternity,
we interlace love within
nothingness.

His white lashes caress the oceans,
gently push snowflakes out of blue eyes.

She butterflies his light into colours
appearing in their joint sky,

tying and untying their knots,
the knots that end and begin in nowhere

They write to each other almost every night,
their messages flap in the cold air.
But their bodies are miles apart.

They know that they will never be equal.
that they are just reflections.

Day and night, human souls,
leave her, the Earth, enveloped in periwinkle,
rising up towards him, the Sun.

His serrated tongue cuts across the horizon,
portioning time into manageable chunks.
When he becomes weary, he shatters
himself into billions of stars, sewing
his shiny presence into her black memory.

She grew up with his absences,
his two-beat rhythm made her bilingual
in tears and smiles. She raised her children
to speak his language- to extinguish life
or soften dust into golden.

Sun and Earth break-up at dawn, unite at daybreak.
The sky pours their sketched kisses into a blue-grey ocean. 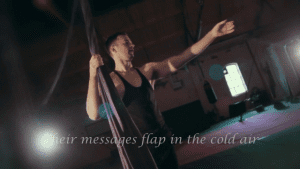 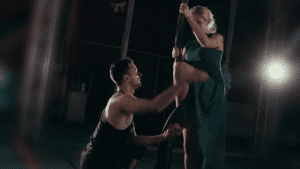 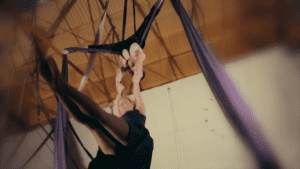 I have been experimenting with music, dance and poetry to see if carefully controlled convergence of three arts can give rise to a new poetic experience. Between 2015 and 2017, I was fortunate to work with three very talented dancers. The theme binding our three dancepoems together is celestial dialogues- conversations between The Sun and The Earth, The Moon and The Sun, and The Earth and The Moon. When thinking about these conversational duets, the search for a ying-yang balance becomes a quest for unity and departure from human-imposed hierarchies.

If the Earth spoke to the Sun, what would she say? And if the Moon talked to the Sun, would they remember the times when they were one? The perennial themes of love and separation somewhat always find their way into a poem…

Eleni Cay is a Slovakian-born poet living in the UK. Her most recent poems were published by Eyewear Press in December 2017 and appeared in Atticus Review, Glasgow Review of Books, Poetry Ireland Review, Acumen and Envoi. Eleni’s award-winning collection of Slovak poems ‘A Butterfly’s Trembling in the Digital Age’ was translated by John Minahane and published by Parthian Books. Eleni is known for her filmpoems, dancepoems and multimedia poetry, which have been screened at international festivals and featured on Button Poetry. She has been invited to read her poetry at the Harvard University, International Ars Poetica Festival, Frankfurt Book Fair, Villa Trebitsch in Vienna, Blackwell’s in Manchester, Poetry Cafe in London and many other beautiful venues.