This fraudulent afternoon
he fills up with little worries.
Not like the daring grasshopper
who insists on making himself heard,
but rather a timid ruffian
lying in wait with hidden knife.

So pass the hours
and it seems nothing happens. 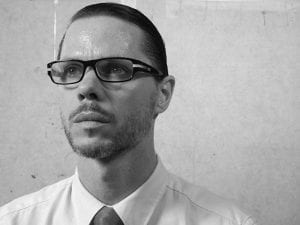 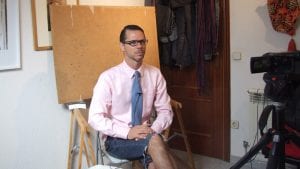 Image: the making of The Afternoon

Process Notes:
Inspired by a person I met in an office I took on the personality of this unblinking bespectacled character with not a hair out of place who nevertheless betrays an underlying nervousness; their words tightly surrounding their head as though they are forever trapped. I particularly enjoy the idea of the poet becoming one of the characters in their poem and am interested in exploring this in future poetry films. I recorded versions in both English and Spanish at the same time. (Spanish version: https://vimeo.com/138450381)