Touch was a video poem that was born from the poem and the concept of longing for touch or contact. It’s objective was to exist and grow like a seed in the imagination of the person I longed for. The footage was taken from archive.org. The footage was also colour manipulated into a hazy pink and lilac. I overlaid two different footages, one where there are hands exploring touch and another that looks as the hands of a tai chi practitioner in movement. For the footage in archive.org I searched for the word ‘hands’, which is beautiful, because you can make very poetic searches on archive.org. The voice was overlaid with another line of the same poem, hence the intertwined voice like an echo. The music was a drone piece by music composer Charlie Miles (mentioned above). He again prepared the melody at the end of creating the visuals and poem. The melody was then inserted in the final piece. The video poem has been published on the online magazine Datableed. 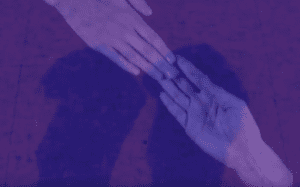