Waiting in the wings of England, by Janet Lees

Waiting in the wings of England:

Destinations the map
mutters darkly over –

the hard to read small print
on what lies ahead

and electric pink signs
singing Princess on Board.

Marching backwards
into a monoculture of rape

spotted with poppies
and patrolled by crows

in their frayed City suits:
watching 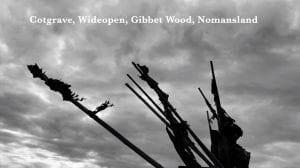 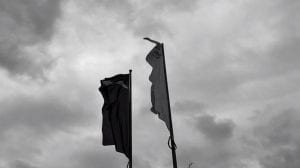 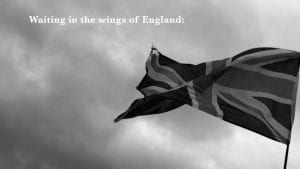 Bio:
Janet Lees is a poet, artist and poetry filmmaker. Her poetry films have been selected for international festivals and prizes including the Aesthetica Art Prize and Filmpoem. Her poetry is widely published and anthologised, and in 2018 she represented the Isle of Man at the Festival Interceltique in Lorient, France, with an exhibition of art photographs and poetry films.

I wrote this poem some time ago. It was inspired by two journeys – a train journey through the heart of England, and a car journey in the Midlands. On the road trip I was struck by the strange, foreboding place names that England is scattered with. On the train journey I was filled with a similar feeling as England flashed past the windows – empty back gardens, scrapyards, tattered Union Jacks, an old horse tethered in a muddy field.

I only recently taught myself how to edit my own poetry films, so I have a big backlog of scraps of footage I’ve collected over the past few years. I have a fascination for flags, especially the liquid way they move in slow motion, which seems to give them a sense of portent.

I looked through and discarded many bits of flag footage before I decided on the three pieces I wanted to use, which to me represented a kind of descent, the opposite of progress, from the Union Jack to the car dealership banners to the fisherman’s poles with their black plastic rags stuttering ominously in the wind.

It took me ages to find exactly the right piece of music to go with the footage and the poem – I scoured various online resources including the YouTube free audio library. I love this part, listening out intently for the track that you will know in an instant is perfect. In the case of this track, ‘Lost in the forest’, there are subtle tribal overtones in the music which, along with its lost, mournful character, created exactly the right mood.

It was only when I had nearly finished putting everything together that I realised this is a poetry film for now; soaked in loss, oozing with existential dread and undercurrents of savagery, it seems to capture the national mood, as a deeply divided Britain faces the prospect of a no deal Brexit.

2 thoughts on “Waiting in the Wings of England”