A body is hanging up
by a column.
The “desert’s wife” takes the corpse
of her last man.
Tadmur, Palmira,
or any name she had got,
stolen, destroyed or deleted.
Memory in exile,
ruin and rebirth.
A hundred of sculptures breathe
the weight of centuries,
hidden in the dark
swallowed by a poisonous silence.
While out they are still fighting,
killing, impure heads are falling down.
Now,
Khaled al-Asaad
crosses other rooms.
Not the golden gates of Jannah;
there are no gardens full of delights
around him,
is not the jasmine’s fragrance
that he smells.
Not the sound of streams
in wich clear waters run,
but the nervous whisper
of a waking up city;
from the west caravans
are bringing new treasures.
Are not Munkar and Nakir’s voices
which plays on the colonnade way
of Bel’s temple.
Philosophers in agorà
are going to catch the day
the sun rises on the sand
and everything seems
to start again 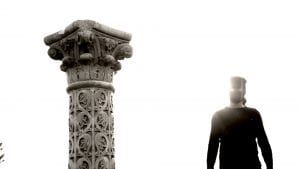 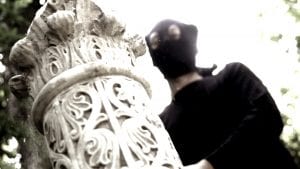 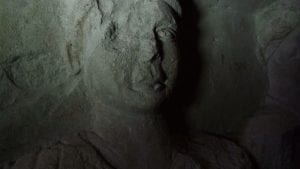 “Jannah” is the islamic concept of Paradise. This video poetry clip is dedicated to the memory of Khaled al-Asaad (1932-2015), the archaeologist murdered by Daesh in Palmira because he didn’t want to reveal the location of the ancient artifacts that he had helped to hide.

SEMIOLABILE CINEMATOGRAPHIC (Puccio Chiesa and Roberto Moroni)
Semiolabile Cinematographic was started in 2003 by poet Puccio Chiesa (1976) and video maker Roberto Moroni (1974) to merge poetic language together with video art and experimental cinema. The first video poems were thus created, as well as the series of “Rebuses”. These are visual rebuses without any logical solution and offer the audience the chance to find “poetic solutions” and to explore different meanings. Since 2004 Semiolabile Cinematographic has started the series of “Ephemeral” (“Summer Ephemeral”, “Icy Ephemeral”, “Other Ephemeral”). The Ephemeral are short video poems which are marked out by a fixed shot. The body and the voice of the poet are always present as he establishes an emphatic relationship with the place where the lyric action is set.
The “Isochromes” were created in 2013, working together with musician Levon James. These are a series of videos which last 3 hours and 20 minutes, like a super-8 film cartridge. They are visions, non-shots, recordings of everyday reactions without any filter or censorship. The “Isochromes” are also meant to disturb the psyche, and they need to be read like a never-ending sequence of informal cinematography, animated by Levon James’s electronic sonorities.
Semiolabile Cinematographic has always directed its steps towards “boundary languages” and in 2008 it created the theatrical performance “Sleepwalkers”, based on the homonymous novel by Puccio Chiesa, and the video reading “Infinito precipite”.
The Metamorphoses (2013) is a performance made up of music, video and word. This show is freely inspired by Ovid’s “Metamorphoses” and is a new reading of the myths of Narcissus, Orpheus and Eurydice, Midas, Daphne, through four different performance actions.
The videos that build the scene are made of fuzinesses, en plen air shots, and refractions of light on water, thus showing the ”impressionistic” style chosen by Semiolabile Cinematographic to tell Ovid’s stories. The original music was composed by Levon James, in the video the actions are by Limen Teatro and Puccio Chiesa. The tests and the voice are by Puccio Chiesa, the direction is by Roberto Moroni.
The last work is The Waste Land, a performance of videopoetry based on the poem of T.S. Eliot.