ON THE NUMBER 73 IN BRISTOL

The disability spotter marks my arrival onto the bus
at Gloucester Road. She does so with the glee of a locomotive
enthusiast caressing the unchecked box in the pad
saved for the rarest of smoke breathers and tunnel divers.
Eyes collide. I am scanned as if in an airport x-ray
machine. In return, I behave as though there is a kilo
of white stuff lining the material that warms my nether
regions. Uncomfortably. I look anywhere but forwards.
Focus instead on the other passengers who seem oblivious
as we cut through the kaleidoscope of Stokes Croft without
a second glance. A man with a crutch and crumpled duvet
takes his seat when we stop at the Bear Pit. I am forgotten.
The double decker boundaries of inappropriate behaviour
shift. The spotter’s gaze moves to a new interest. 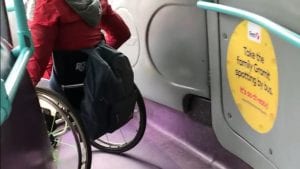 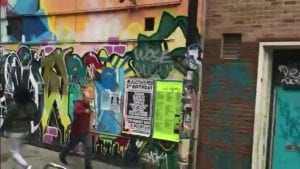 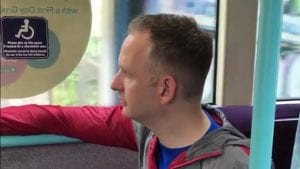 Stephen Lightbown was born in Blackburn, but now lives in Bristol. Stephen experienced a life changing accident when 16 and now writes about his experiences as a wheelchair user.  He can be found on most social media channels via @spokeandpencil and in 2019 Stephen’s first poetry collection, Only Air, will be published.

This film was filmed on a mobile phone on location in the Stokes Croft area of Bristol. It is an edit of one continuous shot of a ten minute bus journey where the camera takes the point of view of the protagonist in the poem. Travelling on public transport can be an odd experience if a wheelchair user particularly the interactions with other passengers. On more occasions than is acceptable I have found my stared at and observed just because I am travelling alone. This is an odd experience and one I wanted to share through the short film.