WHAT IS LOVE?
What is love? I think it is a rainstorm.
Two people ran across the park to shelter under the tree.
He saw her at the gallery. She was wearing a flowery dress.
Now they can’t stop talking. They are standing in a puddle.
They laugh and shake out their wet hair.
Marriages start like this.
What is love? I think it is a new house.
Piling up fast with stuff in every room.
How can she have so many dresses, shoes, cooking pots?
How can he have so many retro computer games?
One day they’ll get a bigger house
but the stuff just keeps growing.
Children’s clothes, teddy bears, floppy rabbits, shoes,
bicycles, more computer things, broken dolls, surf boards.
Suitcases, books, rucksacks, and cake tins.
If a room is empty it doesn’t feel like home.
What is love? I think it is the sunlight
on a July morning at a breakfast table.
They are both old now with icing sugar hair.
A hand held. Shh. Listen to the blackbird.
What’s the song? Do they remember the beech tree and the rainstorm?
What’s the song? It doesn’t matter, but they never felt alone. 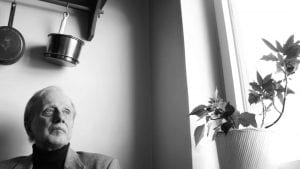 Process notes from Eduardo:
Qué es el amor (What is Love) is my second video (of three) for The Book of Hours by Lucy English. I like to talk in my videos about strong feelings using the actors as a vehicle. When Lucy sent me the poem, the story of the video came to my mind immediately. In fact, it is a story which I have had a long time: an old man totally alone in his home, remembering his life, not knowing what exactly to do with the rest of his days. Lucy’s poem had the perfect words for my little story and for making it stronger and deeper, a voiceover telling the happiness of a marriage, many years of a life compressed in a poem with 22 lines. The words are full of brightness and you will see a strong contrast with the images. The poem is inside the old man, it is the story of his marriage. The contrast with the words is in the solitude of this man, what we see is what has happened after the poem is ended, we see the man devastated for the loss of his wife… when the poem says “They never felt alone”.

Solitude and sadness are surrounding us, we think that maybe we are safe, but life cuts as a knife… I work with professional actors most of the time, but for this video I asked to my neighbour Steffan Carlson if he would be interested in playing the role of this old and lonely man. He told me he had never played in a film or theater, but he wanted to try. It was a good choice and my intuition didn’t fail me. Steffan acted as a professional: emotive, involved and risking his emotions. I did not want to use music for this video, I chose just to have two sounds: the blackbird and the sound of the clock at the end. The two sounds are inside the mind of the old man too, creating a dreamy space and accentuating the pass of time. Finally I have to say that I chose black and white, as in many other of my videos, because I consider it very expressive and intense, I think it helps to create a unique space of imagination and drama. I read the poem in Spanish because in my first collaboration with Lucy for The Book of Hours (High Summer) I used the text of her poem on the screen and in my last (Daisy Chain) we had the voice of Rebecca Tantony reading Lucy’s poem, so I wanted to have this variety of languages and voices.

Bios
Lucy English: was born in Sri Lanka and grew up in London. She studied English and American Literature at the University of East Anglia, and has an MA in Creative Writing from Bath Spa University. She has three novels published by Fourth Estate: Selfish People (1998), set in contemporary Bristol; Children of Light (1999); and Our Dancing Days (2000), set in a Suffolk commune in the 1970s. She is best known as a performance poet, first winning the Bristol Poetry Slam in 1996, and going on to tour worldwide, performing her poetry at several international festivals including the Edinburgh Fringe, Austin International Poetry Festival, Wordfest, at Calgary in Canada and The Cuirt in Galway, Ireland. Her first poetry collection Prayer to Imperfection was published by Burning Eye books in March 2014. In 2003 she co-ordinated the International Conference in the writing and practice of performance poetry at Bath Spa University and since then run the only performance poetry module at a UK university. In 2006 she was artistic director of Apples and Snakes Poetry Tour, Exposed. In 2007, she was a finalist in the first BBC Radio 4 Poetry Slam. She has toured Sri Lanka, India, Thailand and Taiwan running workshops and performances. She has also run workshops for the Arvon Foundation and The New Writing Partnership. In 2010-11 she toured the UK with the multi-media poetry show Flash and in 2014-5 with Count Me In. In 2012 and 2013 she organised ‘MIX’, the conferences in digital writing. She is co-creator of the poetry film festival Liberated Words, which curates and screens poetry films. She is currently studying for a PhD in digital writing. Lucy English is a Reader in Creative Writing at Bath Spa University. She was the Royal Literature Fellow at the University of Swansea from 2003-6 and 2011-12 and the Royal Literature Fellow at the University of Cardiff Institute during 2007-08.